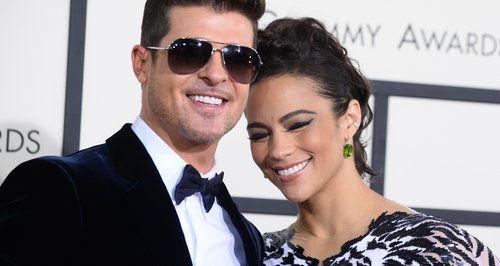 The 'Give It To You' singer then performed a cover of 'Let's Stay Together' after talking about his love.

Robin Thicke declared his love for Paula Patton during a concert over the weekend just weeks after the pair announced their separation.

The married couple released a statement in February confirming they have "mutually" decided to separate after nine years of marriage.

However during Robin's Atlantic City concert on Sunday (2nd March), a fan shouted out from the crowd, "I love Paula!", to which Robin quickly responded: "I do too!"

The 'Blurred Lines' singer then broke straight into a cover of Al Green's classic song 'Let's Stay Together'.

Last week after being quizzed about the separation by a TMZ reporter Robin admitted he is "just trying to get her back".

Robin Thicke and Paula Patton married back in 2005 and welcomed son Julian in 2010.