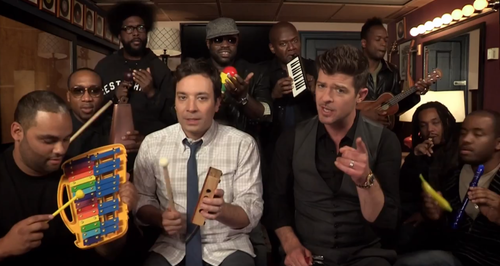 The track gets a new makeover during the star's appearance on the hit chat show.

Robin Thicke has teamed up with Jimmy Fallon and The Roots for a performance of 'Blurred Lines' on children's instruments.

The singer was a guest on the comedian's hit chat show this week and sat down for a one-of-a-kind performance.

It's been a busy week for the star, who was also a guest on The Today Show and performed a few tracks for his morning appearance.

Watch Robin Thicke team up with Jimmy and The Roots for the rendition of 'Blurred Lines' below:

Robin also chatted this week about criticism of the lyrical content of his new song.

He claimed it's a "feminist movement" and had nothing but "respect" in mind when writing the song.