The 'Blurred Lines' singer was joined by wife Paula and their son Julian for a day off in New York this week.

Robin Thicke was pictured rowing along a lake in Central Park with his family this week.

The 'Give It 2 U' singer spent the day with wife Paula and their son Julian as they soaked up the sunshine in New York on a row boat.

Meanwhile, the singer has this week been speaking about his performance with Miley Cyrus at the MTV VMAs 2013.

The US/Canadian star said it was "fun and silly" and they knew what the pair were getting into ahead of their on-stage antics.

Check out the picture of Robin Thicke with his family below: (Picture: X17 Online) 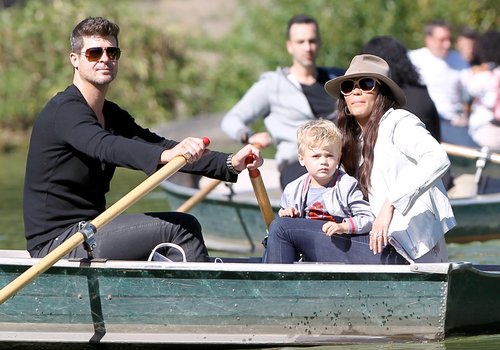 He has also been spotted spending time with Jennifer Lopez in the recording studio – fuelling talk of a collaboration between the artists.

Robin is also among the nominations for the upcoming MTV EMAs 2013.