The singer's track scores its seventh week at the summit of the US chart this week.

Robin Thicke has claimed the longest running Hot 100 number one of the year with his smash hit 'Blurred Lines'.

The track overtook the previous best from Macklemore & Ryan Lewis who spent six weeks at the summit with 'Thrift Shop' earlier this year.

'Blurred Lines' also topped the digital songs chart for an eight week with a further 350,000 copies sold this week.

Miley Cyrus also jumped up on this week's Hot 100 from three to two and Jay-Z and Justin Timberlake's 'Holy Grail' was a new entry at eight. 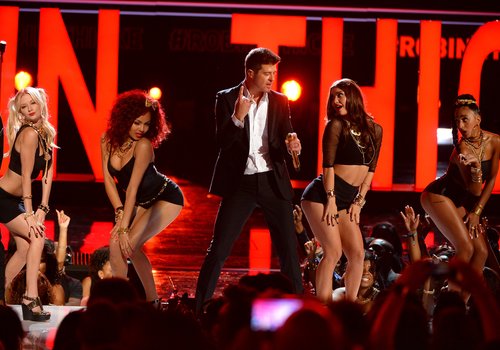 Meanwhile, the music video for 'Blurred Lines' has been parodied twice this week.

Once by a US Boylesque troupe called Mod Carousel and another by someone who pieced together Bill Clinton's speeches to the words of the track.