He's Mr. Worldwide... but we reckon Pitbull should have changed his moniker to Mr. Wembley at the #CapitalSTB this weekend - judging from the way he had EVERYONE loving life during his set.

He got the party started from the moment he got on the stage and the moment we all couldn't get enough of was when Ne-Yo rocked up to join his good pal Pitbull to perform their hit 'Give Me Everything' - a TOTAL crowd pleaser!

Pitbull's set started with his life story being projected on the screen before the man himself came out to a host of screams from the crowd following on from a group of VERY sexy ladies wearing not much more than red blazers which they quickly whipped off to reveal slinky white bodysuits - he's definitely winning on showmanship!

The carnival vibes continued as Pitbull launched into 'I Know You Want Me' - 80,000 people were up and dancing with him and his snake hips!

For his next #CapitalSTB hit Pitbull headed back down onto the runway to get even closer to all the amped up fans out there for 'Hotel Room Service'.

He wrapped up the track with a quick bass blast of 'Eye Of The Tiger'... before bringing things well and truly up to date with one of his latest and greatest chart-breakers, 'Feel This Moment'.

Pitbull smashing it at the @CapitalOfficial Summertime ball #CapitalSTB pic.twitter.com/8iCxH1BHiC

Pitbull was absolutely amazing I am so in love!!! #CapitalSTB

The rap star rounded off his stellar STB set with one of his biggest songs ever... and he wasn't alone! Ne-Yo made a surprise guest appearance for the final track if Pitbull's set to sing 'Give Me Everything' with Mr. Worldwide. 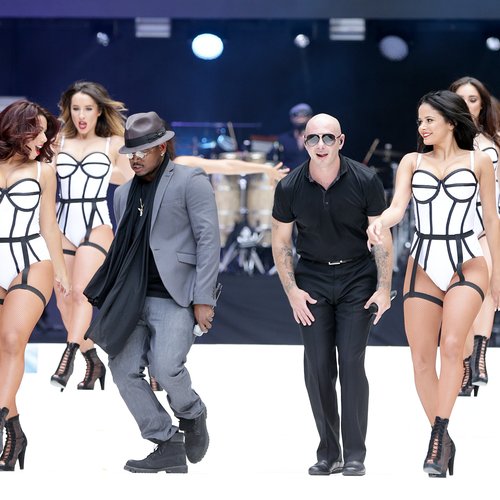 Ne-Yo was looking sharp as HELL as he rocked up in a grey suit and his trademark trilby... the crowd were absolutely LOVING this one!