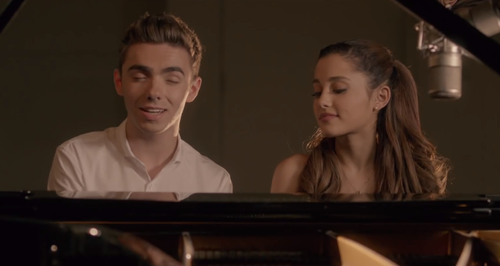 Nathan HAS written a song about his ex-girlfriend Ariana Grande – but she has nothing to worry about as it’s ‘nice’.

We’re eagerly awaiting Nathan Sykes’ debut album, but nowhere near as much as Ariana Grande will be – as a song on the record was written about her!

Nathan admitted that there was a track about his romance with Ariana but that she doesn’t have anything to worry about as it’s ‘nice’ rather than bitter.

Nathan told the Daily Star, “One of the songs is about Ariana. She hasn't heard it yet. Knowing Ari she'll corner me the next time we bump into each other and demand I play her the song.”

"It is a nice song. She has nothing to worry about. I'm not scared of her reaction. It's very complimentary and emotional actually. She will hear it and think 'Oh so you do have feelings'."

He’s clearly not been taking songwriting tips from the likes of Taylor Swift’s ‘Never Ever Getting Back Together’ then!

Nathan’s debut record is set to drop later on in the year but he admits his ex bandmates from The Wanted haven’t heard any of his new music yet either.

He revealed, “None of the boys have heard it. I would let them listen to it if they wanted to."