Macklemore Confirms He And Ryan Lewis Are Back In Recording Studio 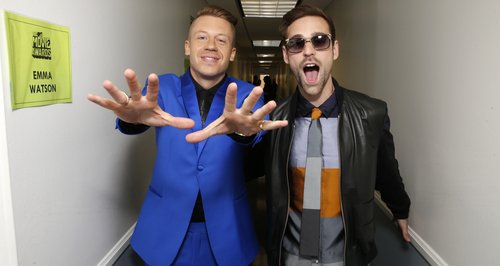 The 'Same Love' duo are believed to have started work on the follow-up to 'The Heist'.

Macklemore has confirmed that he and Ryan Lewis are back in the recording studio together, leading to speculation they are working on a new album.

The pair launched 'The Heist back at the end of 2012, and have scored seven Grammy nominations for next month's ceremony, and are now believed to be starting work on album two.

"Very happy to be back in the lab with this guy," Macklemore tweeted over the weekend, alongside a shot of him and Ryan Lewis back in the recording studio.

Macklemore & Ryan Lewis are up for seven awards in total at the Grammy Awards 2014 including Album Of The Year, Song Of the Year for 'Same Love' and Best Rap Song for 'Thrift Shop'.