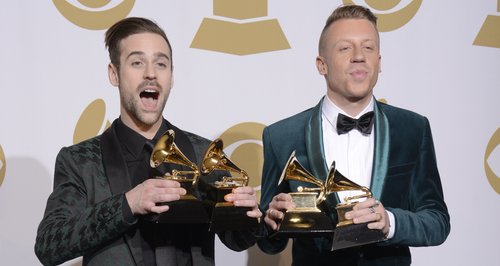 The stars top a new poll based on the sales of some of their biggest singles.

Macklemore & Ryan Lewis have been named as the most successful songwriters of 2013 in the UK.

A new study, conducted by Music Week magazine, noted the success of their hit singles' Thrift Shop', 'Can't Hold Us' and 'Same Love'.

The pair beat the likes of Pharrell – who came in second following the success of 'Blurred Lines' and 'Get Lucky'.

"Macklemore and Ryan Lewis were virtually unknown in the UK at the beginning of 2013, so it is quite some feat they finished as the year's most successful hit songwriters," said Paul Williams, the head of business analysis with Music Week.

"Their victory was bad luck on Pharrell Williams who had his hand in three No.1 singles last year, but as he shared the writing on 'Blurred Lines' and 'Get Lucky' with others ended up with a lower score."

The top five was rounded off by Passenger star Mike Rosenberg thanks to his single 'Let Her Go'.

It's the latest accolade bestowed upon Macklemore & Ryan Lewis following their recent triumphs at the Grammy Awards - where they took home four prizes.