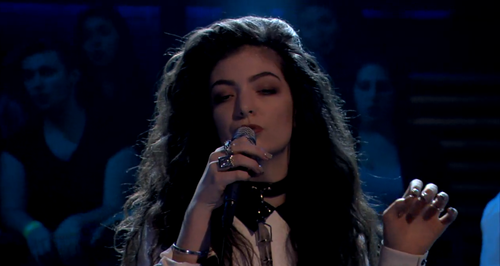 The 16 year-old New Zealand star wows with her appearance this week.

Lorde made her American TV debut this week with a performance of new song 'Royals' on Jimmy Fallon's chat show.

The 16 year-old star gave a triumphant rendition of her latest single on the hit US show.

The track is taken from the singer's debut album Pure Heroine.

Check out Lord's performance of 'Royals' on Late Night with Jimmy Fallon below:

Lorde, real name Ella Yelich-O'Connor, recently revealed that she turned down the chance to support Katy Perry on tour.

She was also forced to defend comments on Taylor Swift this week after they were taken out of context during a recent interview.