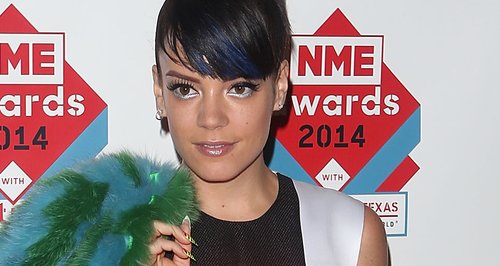 The 'Air Balloon' singer has described Kanye as a "genius" in the wake of her new album title reveal.

Lily Allen has admitted she is "terrified" about the possibility of getting a phone call from Kanye West, after naming her new album 'Sheezus'.

The 'Hard Ou Here' singer announced the title of her third record earlier this week, which she has described as an "homage" rather than a "p***-take" of the US rapper's 2013 release.

"I'm terrified, I thought he'd think it was a diss, but it's totally not a diss," Lily revealed to Australian station Nova this week. "I love Kanye, I think he's brilliant.

"He speaks his mind, whether what he's saying is ridiculous or not," she explained. "He honestly does believe it and I think there's a lot to be said for that.

"In this day and age people are so bland and beige and, 'I love everyone and everything and I totally don't have a problem with everything'," Lily added. "But he does have a problem!"

Lily Allen launches new single 'Air Balloon' on 2nd March, but has yet to confirm a release date for 'Sheezus'.