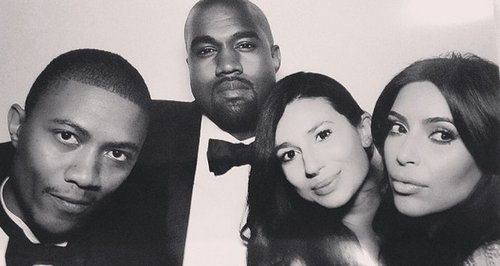 So as US rapper Kanye West marries TV reality star Kim Kardashian in private ceremony in Italy, we take a look at how the world of Twitter reacted to the event.

There were the fans who just couldn't get enough, those who really "don't give a s**t", and of course as always... those who somehow haven't got a clue what's going on.

Let's kick things off with the super fans who just can't get enough of the #Kimye wedding...

Aw just seen a picture of Kim and Kanye at the altar, soooooooo cute!!

Excited to see photos of Kim and Kanye's wedding

There were the people who really didn't care about Kim & Kanye's big day...

I care about everything more than Kanye West and Kim Kardashian getting married. Literally, everything.

I couldn't care less about kim and kanye wedding

But exactly how did this lot completely manage to avoid anything to do with what was going on?

What? Kim and Kanye are married....like what?

I've seen and heard nothing about this Kanye West and Kim Kardashian wedding and that's already waaaayyyyyy too much.

Some REALLY didn't have a clue what was going on!

Did Kim and Kanye divorce yet or nah

The expected dose of sarcasm...

AND..the fans who were imagining a re-creation of 'THAT' Taylor Swift moment...

Priest: Kim, do you take Kanye to be your lawfully wedded husband to love and cherish? Kim: I.. *Kanye grabs mic* Kanye: She do

Some people completely messed up their wedding travel plans

I missed Kim and Kanye's wedding in Italy by 5 days....

While some people's invite obviously got lost in the post! #Awkward

But I want to go to Kim and kanye's wedding

I give Kanye and Kim's marriage no longer than 6 months

I still can't believe I was wasn't invited to Kim and Kanye's wedding. Oh well. I'm sure she'll have another one next year.

Some valid points were made by the fans?

Kanye and Kim had John Legend singing 'ordinary people' at their wedding. Not sure private jets and locations in two countries quite fits.

Let's be honest, all people want are the details right? (around $11 million by the way)...

anyone know how much kim and kanye spent on all of their wedding?

But on the whole Twitter opted for a worldwide trend of well wishes for Kim & Kanye's big day. Even P Diddy got involved!

anyone know how much kim and kanye spent on all of their wedding?

Kanye West And Kim Kardashian Wedding: The Couple Get Married In Italy