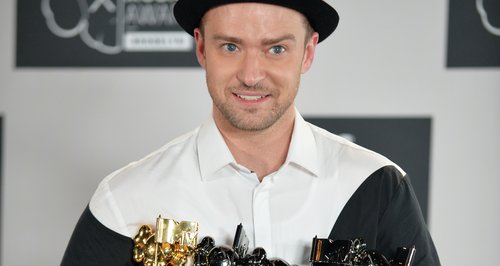 The likes of Lady Gaga, Katy Perry and 'N Sync all performed at one of the year's biggest awards shows.

The 'Suit & Tie' singer walked home with a total of three awards, of the six he was nominated for, as well as receiving the prestigious Michael Jackson Video Vanguard Award for his music videos of the years.

Justin picked up the hotly contested Video Of The Year Award for his single 'Mirrors', as well as Best Editing for 'Mirrors' and Best Direction for 'Suit & Tie', while he also gave medley performance at the high profile music event.

The US star performed some of his biggest songs as a solo artist as part of the set, including 'Sexy Back' and 'Cry Me A River', before being joined on stage by his former 'N Sync' bandmates to perform together for the first time in over a decade.

Check out a picture of Justin picking up one of his awards from Hollywood star Joseph Gordon-Levitt below (Credit: Getty):

Macklemore & Ryan Lewis also had a hugely successful showing at the VMAs 2013 after winning Best Hip-Hop Video and Best Cinematography for their song 'Can't Hold Us' as well as Best Video With A Social Message for 'Same Love'.

Macklemore also gave an emotional performance of their gay equality anthem 'Same Love' alongside singer Mary Lambert, before they joined for a surprise duet by Jennifer Hudson at the song's finale.

Other big winners on the night include Bruno Mars, who won two awards, Taylor Swift who picked up Best Female Video for 'I Knew You Were Trouble' and One Direction who won Best Song Of The Summer for their latest single 'Best Song Ever'.

Check out a picture of One Direction backstage at the VMAs 2013 below (Credit: Getty):

Lady Gaga gave the first televised performance of her brand news single 'Applause' to kick off the show, performing in four different outfits throughout the set.

The show then saw Miley Cyrus playing her huge hit 'We Can't Stop' before surprising the Barclays Center audience with a raunchy duet of 'Blurred Lines' alongside Robin Thicke.

Katy Perry brought the MTV Video Music Awards 2013 to a close with a boxing-inspired performance of her brand new single 'Roar', the lead track from her album 'Prism'.

Those among the night's presenters included Ed Sheeran, Emeli sand, One Direction and a surprise appearance from Daft Punk, Nile Rodgers and Pharrell Williams.

Check out the full winner's list from the MTV Video Music Awards 2013 here.