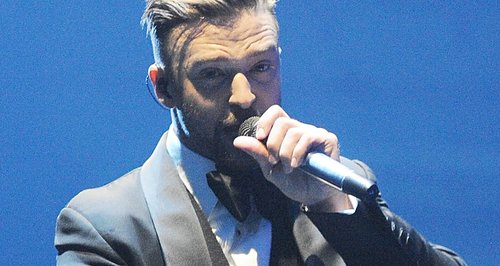 The 'Take Back The Night' star earns another accolade while touring across the UK this week.

Justin Timberlake has replaced David Beckham in a new list of the most stylish celebrity men of the moment.

The 'Take Back The Night' singer, who is currently on tour across the UK, was named the number one most stylish chap in a new poll compiled by Fashion One Television.

"2013 was the year Justin Timberlake dominated the style game since it marks the singer's return to the stage and into the spotlight with a much more mature but still refreshing and fun style," a spokesperson for the network said. "He can and will wear nearly anything and pulls off all of those fashion choices with great confidence and swag."

Justin has had a busy month after unveiling his new music video for 'Not A Bad Thing', and kicking off the UK leg of his tour 'The 20/20 Experience' earlier this week.

> Find Out ALL About Justin Timberlake' UK tour Dates... And How To Get tickets!

The US singer will perform a second London show at the O2 Arena tonight (2nd April) and continues with a show at the Hydro in Glasgow on Friday 4th April.

Check out the full top ten list of the most stylish men right now below:

[[ This video has been removed ]]
Justin Timberlake - Mirrors on MUZU.TV.