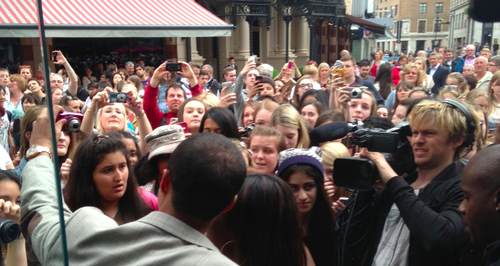 Watch the moment the JLS singer delighted a fan outside Capital headquarters in London.

JLS star and Capital FM presenter Marvin Humes has surprised one lucky fan with a pair of tickets to the Summertime Ball.

Marvin gave the tickets to the girl ahead outside Capital's London headquarters in Leicester Square tonight (31st May).

You can watch a video of the moment the JLS star gave the girl an invite to our biggest Ball ever below.

Marvin is on air on Capital tonight from 7pm.

Capital's Summertime Ball takes place at London's Wembley Stadium on 9th June, with performances from the likes of Robbie Williams, Taylor Swift and The Wanted.

Watch Marvin before he gave away the tickets:

The Summertime Ball is sold out, but you can win your way in by tuning into Capital and entering the competition below.