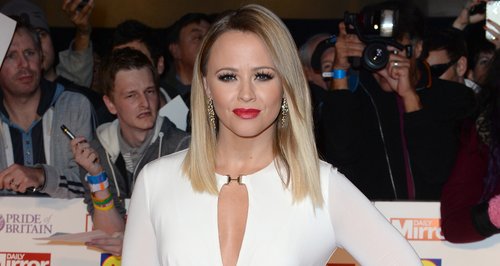 The 'Something New' singer says the girls had a great time partying in Amsterdam over the weekend.

Girls Aloud star Kimberley Walsh has clarified that Nicola Roberts getting her "toe-sucked" during their birthday break out in Amsterdam last weekend was "not voluntary".

The 'Call The Shot' singer joined birthday girl Nicola and former bandmate Cheryl for a trip to the Dutch city with friends over the weekend, where they shared several pictures of themselves enjoying their trip away.

One of the pictures showed the girls being treated to a dance by a masked performer who proceeded to suck Nicola's toes during her performance, which Kimberley happily joked about on the red carpet of the Pride Of Britain Awards 2013 last night (7th October) last night.

"It was fun, as you probably saw from our tweetfest!" Kimberley revealed to Digital Spy at the event. "The toe-sucking was not voluntary, I need to put that out there! While in Amsterdam!

Check out a picture of Nicola Roberts enjoying her birthday out in Amsterdam below (Credit: Instagram):

"We had a really good time, we celebrated in style," the former girl band star explained. "We partied until the early hours of the morning, which we don't do very often.

"While we've all got a bit more time to breathe it's nice to actually go out and have fun."

Girls Aloud called time on the band at the start of 2013 as they each go on to various solo projects, with Cheryl Cole believed to have started work on her next solo album.