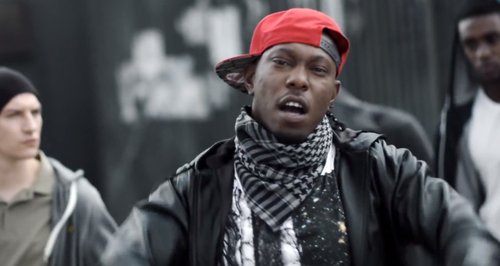 The UK rapper is back with a politically charged music video for his latest 'The Fifth' single.

Dizzee Rascal is back with the music video for his brand new single 'Love This Town'.

The 'Bonkers' rapper heavily references the 2011 London riots in his latest music video, from the song taken from his album 'The Fifth'.

Dizzee is seen leading a gang through a London suburb who proceeded to do good deeds around the community, despite the locals' initial apprehension about them.

Among the group's humorously staged good deeds are washing a shops windows, recycling cardboard from an electronics store and rescuing a cat stranded on top of a phone box.

'Love This Town' is the latest track to be lifted from Dizzee's latest album 'The Fifth', following 'I Don't Need A Reason' and 'Goin' Crazy'.