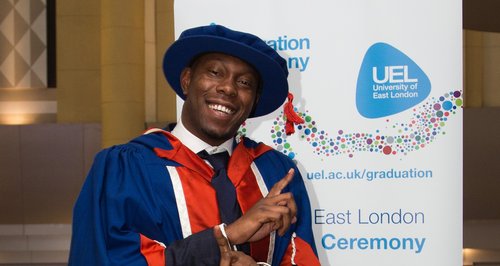 The 'Love This Town' rapper speaks to Capital's Max about his most recent honour.

Dizzee Rascal has been speaking to Capital about being awarded an honorary degree from the University of East London recently and said the achievement is "wicked".

The British musician has been honoured for his services to music and contribution to the local community and he admitted it was great to be acknowledged in such a way.

Speaking to Max, he said: "It's just an amazing thing. I dropped out of college in the first year to pursue what I'm doing now so I didn't get the chance to go to Uni.

"The only way I got to go to University was performing at Universities over the years. So it's wicked that it's been acknowledged."

You can listen to Dizzee's full interview with Max tomorrow evening from 7pm straight after this week's Vodafone Big Top 40.

Meanwhile, he will be heading to London's O2 Arena next weekend for Capital's Jingle Bell Ball 2013.