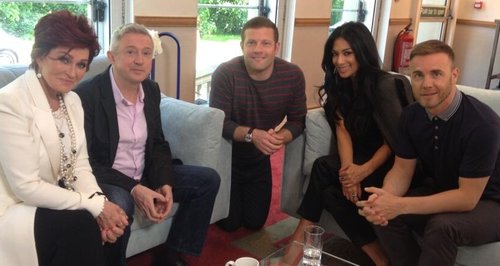 The full panel was on hand today in the Scottish city to see the first batch of X Factor hopefuls.

Sharon Osbourne made her highly anticipated comeback on The X Factor UK today (4th June) as the first batch of auditions got underway.

The former judge made her glamorous return at the auditions in Glasgow this afternoon where she was greeted out of her car by two muscular shirtless men in kilts, who posed alongside The Talk co-host Sharon on the steeps of the Hilton Glasgow Grosvenor Hotel.

Sharon opted to keep her debut look simple with a fitted white jacket and black trousers, along with her ubiquitous sunglasses, before heading inside to meet up with the other judges.

Check out a picture of Sharon Osbourne after making her return to The X Factor UK below (Credit: PA):

The judge last regularly appeared on the show in 2007 but has returned to replace Tulisa Contostavlos as the newest member of the ITV show's panel.

View a picture of Nicole Scherzinger at the auditions today below (Credit: PA):