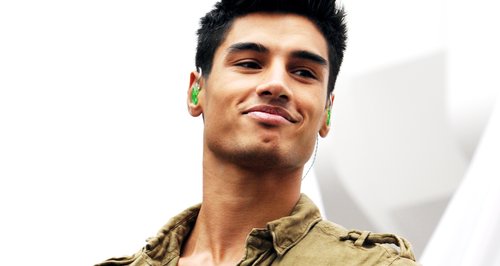 The 'We Own The Night' star proposed to his girlfriend during his recent birthday celebrations.

The Wanted star Siva Kaneswaran has announced that he an his long-term girlfriend are engaged to be married.

The 'Show Me Love (America)' star and shoe designer Nareesha McCaffrey confirmed the news this week, after being together for six years.

"It was like a military operation to plan the proposal," Siva reveals in this week's Hello! magazine. "I couldn't even tell the other boys in the band in case they blew the surprise.

"I said to her I wanted a present I would always remember this year by, for you to be my wife," Siva recalled of his proposal at his own surprise birthday party. "I'd bought the ring months before, I'd been trying to figure out the right time.

"I love her, I lover every bit of her," the boy band star explained.

"I'm still in shock, I don't like surprises and he really surprised me, but I was so happy," Nareesha added. "I can't wait to start planning the wedding.'

The Wanted recently returned with their brand new album 'Word Of Mouth'.