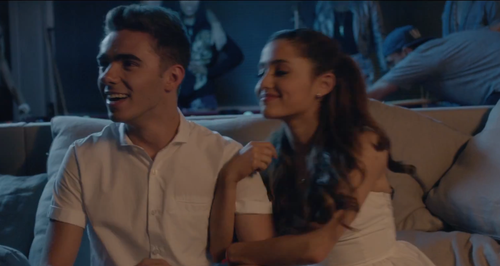 The 'Glad You Came' star teamed up with the US singer for the special collaboration.

The Wanted singer Nathan Sykes can be seen recording in the studio and getting close to Ariana Grande during the music video for the pair's new song 'Almost Is Never Enough'.

The song was first unveiled to the world towards the end of last month – and features on the female singer's debut album 'Yours Truly'.

The video sees the pair working on the song and recording their vocals in the studio, as well as footage of them sharing an embrace on the sofa.

Other collaborations on Ariana's album will include the likes of Mac Miller and Big Sean.

Check out the official music video to Ariana Grande's duet with Nathan Sykes 'Almost Is Never Enough' below:

Meanwhile, The Wanted have been busy out in the US recently as they promote new single 'We Own The Night'.

The boys gave a triumphant performance of the track during an appearance on Jimmy Kimmel's hit chat show this month.