Stormzy isn't here for anybody's negativity online and isn't afraid to call out the haters, especially when he's got better things to do like learn the guitar!

First off, can we just say how excited we are that Stormzy is learning the guitar to play on his new album, after making such an iconic album as 'Gang Signs And Prayer' you start to wonder how the grime star could top it, but it seems he's well on his way already!

Stormzy Was Spotted Defending Little Mix From Trolls On Instagram

He took to Instagram to show off his new guitar skills, but one person decided to throw some shade his way in a now deleted comment, and lets just say Stormzy had absolutely no time for it. 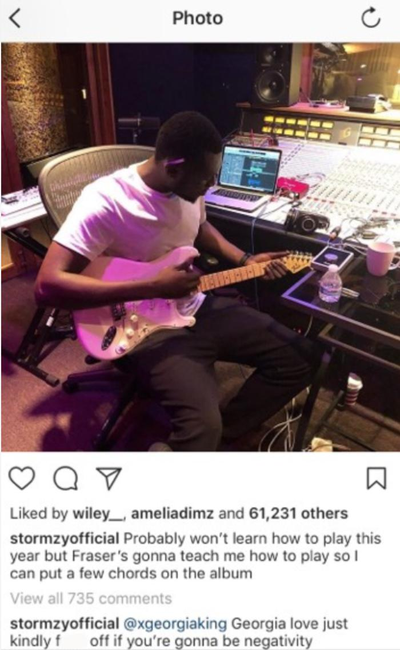 We aren't surprised she deleted her comment as quick as lightening - you really don't want to be called out on one of the biggest stars on their own Instagram, but what's with the shade?! The poor guy is only trying to learn an instrument! Although he's been quiet online recently, he also clapped back at trolls who called him out for collaborating with Little Mix on 'Power' - reminding everyone they're the biggest band since the Spice Girls.