The 'She's The One' singer was pictured leaving his hotel with the family.

Robbie Williams was seen heading for a day out in Venice this week with his wife Ayda and their daughter Theodora 'Teddy' Rose.

The 'Angels' singer wore a short-sleeved white linen shirt and sunglasses as Ayda held onto their baby girl.

She kept things playful in a frilly black skirt and thin red scarf.

The couple were seen boarding their boat taxi as they left the five-star Gritti Hotel.

Check out a picture of Robbie Williams with his family below: (Picture: Splash) 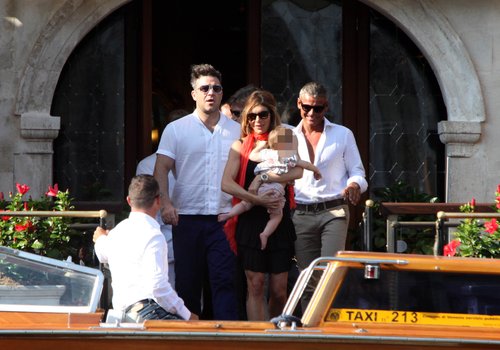 Meanwhile, Robbie is preparing for the end of his 'Take The Crown' European stadium tour.

Following shows in the likes of the UK, Germany and Switzerland, the tour will conclude on Sunday (25th August) at the Viking Stadion in Norway.