PSY Heads For Dinner With Will.i.am And Hangs Out With Scooter Braun

The 'Gentleman' singer was spotted out in LA on a couple of business meetings.

PSY has previously hinted at a collaboration with Wil.i.am after being spotted in the studio together and now the pair were seen dining out in Hollywood.

The K-Pop man kept things casual in a smart shirt and shorts with Will rocking long grey socks, shorts and a loose fitting t-shirt.

Will had his iPad and iPhone in hand as they left the Katsuya restaurant to a group of paparazzi waiting outside.

PSY was also eying up Will's custom $900,000 car as the valet pulled up to drop the motor back to its owner.

Check out the photo of PSY with Will.i.am in Hollywood below: (Picture: Splash) 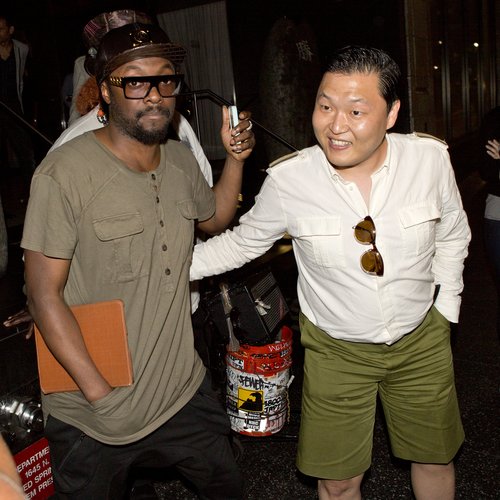 The 'Gangnam Style' singer was also meeting with Scooter Braun and shared a picture of the pair hanging out on his Twitter account.

This week, PSY was spotted riding on top of a fake white horse as he filmed a new TV advert for a Korean food company.

having a creative meeting w/ @scooterbraun...like this pic? lol pic.twitter.com/sfLsuGG6p9

He is busy working on his new album as he aims to match the success of his singles 'Gangnam Style' and 'Gentleman'.