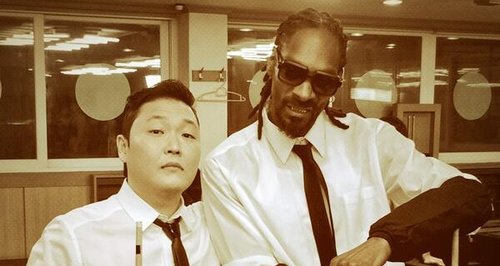 The K-Pop star poses for a shot with the rapper as the follow-up to 'Gentleman' gets ever-closer.

PSY has been seen posing with Snoop Dogg as he teases his next music video.

He was the viral sensation of 2012 as 'Gangnam Style' went on to clock one billion views on YouTube – the first video to do so.

The follow-up 'Gentleman' also went on to notch a further ½ billion views and anticipation for a third instalment has been building for months.

Billboard reports that his Korean label confirmed the new video has been completed.

In the shot PSY posted to Twitter, he and Snoop are seen chilling out at a pool table.

PSY's new album is expected to be released this year and could feature a duet with Justin Bieber after he confirmed the pair had recorded something special together back in 2012.