The K-Pop singer's imposter was once again out in force at the sporting event this past weekend.

PSY's imposter, who turned up at Cannes Film Festival 2013 last week, has once again returned at the Monaco Grand Prix.

The lookalike managed to get trackside at the Formula One event on Sunday (26th May) and fooled celebrities such as David Hasselhoff and Britain's Got Talent judge Amanda Holden.

It wasn't until the real PSY took to his Twitter last week to reveal that he wasn't in Cannes that the imposter was caught out.

Amanda Holden was skeptical about the genuiness of the PSY she met and posted a question to her followers on Twitter.

Check out fake PSY with Amanda Holden at the Monaco Grand Prix below: (Picture: Twitter) 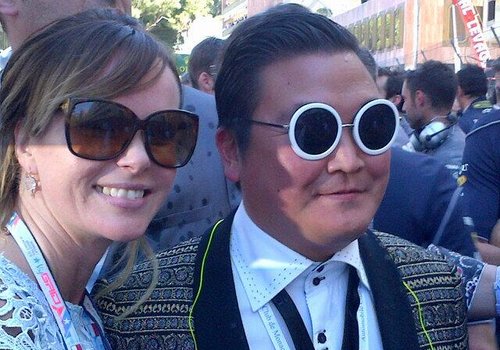 "Not sure if this guy is kosher?! Rumours circulating he was a fake? What do YOU think?!" she tweeted.

Meanwhile, the real PSY will be in the UK next month as he performs at Capital FM's Summertime Ball 2013 on a line-up which includes the likes of Taylor Swift and Robbie Williams.