The 'Gangnam Style' man said he was making new friends at the event in New York last night.

PSY told fans he finally got the chance to talk to Beyonce about his recent cover of 'Single Ladies' when the pair met at the Met Gala Ball in New York last night (6th May).

"finally talked to @Beyonce about "single ladies" at #MetGala," he tweeted alongside the image.

PSY wore a red leotard for his rendition of the song at his The Happening concert in Seoul last month.

Check out a picture of PSY with Chris Martin at the Met Gala ball below: (Picture: Twitter)

Meanwhile, PSY has been speaking about the "worst week" of his life recently as recalled the week leading up to the release of new single 'Gentleman'.

The South Korean singer admitted he was left worried at being known as a one hit wonder – but with almost 300 million YouTube views – he's fast on the way to matching the record breaking stats of 'Gangnam Style'.

Check out a picture of PSY with Beyonce at the Met Gala ball below: (Picture: Twitter) 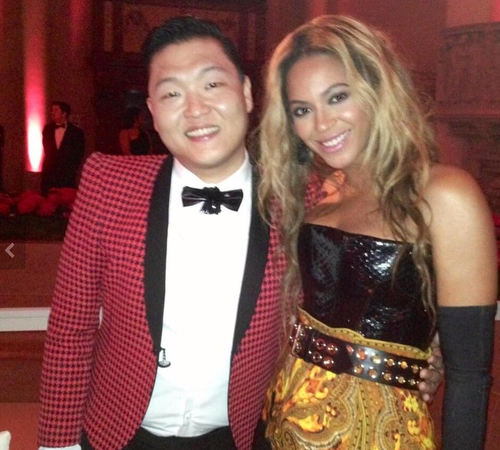