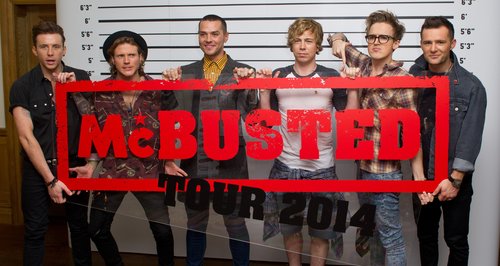 Find out when and where the new supergroup will be performing and how to get your hands on tickets.

McFly and Busted will unite in 2014 as a new supergroup called McBusted for a new arena tour across the country, and have now added four additional dates due to overwhelming demand.

The two groups announced the news in London last week (11th November) as part of a special event confirming plans for Busted stars Matt Willis and James Bourne to join McFly for the special tour from April next year.

McBusted will kick off their tour with a show in Glasgow on 17th April, performing 21 shows up and down the country at cities including Liverpool, Newcastle, Birmingham, Sheffield and at London's O2 Arena.

Busted originally split back in 2005 after two incredibly successful albums, with the likes of 'Air Hostess' and 'Year 3000' among their many hits, although original member Charlie Simpson has opted not to be involved with the reunion tour.

Tickets for the McBusted 2014 tour are on sale from now.

Check out the full dates for McBusted's 2014 tour below: