The 'Rule The World' singer took to the stage just over a week after his fourth child, baby girl Poppy, was delivered stillborn.

Lily Allen has paid tribute to Gary Barlow after he joined his Take That bandmates at the London 2012 Olympic Games closing ceremony last night (12th August).

The X Factor judge took to the stage to perform 'Rule The World' with the rest of the band at the Olympic Stadium – just over a week after his fourth child was delivered stillborn.

In an emotional performance, Take That sang the track as the Olympic Flame was extinguished, marking the end of the London 2012 Olympics.

Lily, who suffered two miscarriages before giving birth to her first child last year, wrote on Twitter: "I don't know how Gary Barlow does it. #amazing.

She added in another message: "What a guy , seriously brave."

Take That and The X Factor UK judge Gary Barlow sings 'Rule The World' with the rest of Take That at the Olympic Stadium: 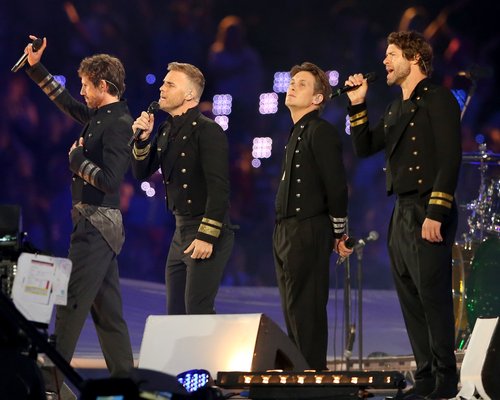 The closing ceremony also featured performances from the likes of One Direction, Jessie J, Ed Sheeran, The Spice Girls and Tinie Tempah.

Athletes from every nation in the Olympics were among the 80,000 fans who enjoyed the spectacle in east London.