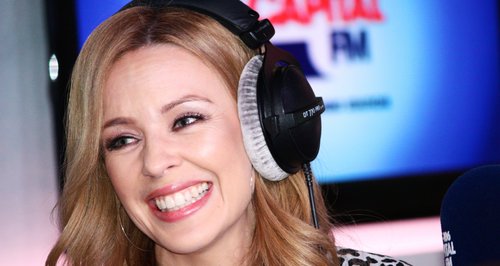 The 'Kiss Me Once' singer reveals exactly what fans can expect from her brand new video next week.

Kylie Minogue has opened up exclusively to Capital FM about her music video for 'Into The Blue', ahead of the video's premiere this coming Monday (3rd February).

Kylie Minogue On Her 'Into The Blue' Video...

The 'Time Bomb' singer unveiled the song with a first play on Capital Breakfast back in January, and promises an "emotional" video after working once again with the director behind her classic promos like 'Can't Get You Out Of My Head' and 'In Your Eyes'.

"The main video is directed by Dawn Shadforth, who directed 'Can't Get You Out Of My Head' and 'Spinning Around' and 'Two Hearts' and 'In Your Eyes' , so we've done a few good things together!" Kylie told Capital's showbiz reporter Kevin Hughes, on the set of her BRITs Mastercard Priceless Moments video shoot. "And 'Into The Blue' is unlike any of those things, it's very touching.

"It's a man and a woman who are having one of those long-lost weekends where things go really great and things get really emotional," she explained. "I love it. My confession is it didn't feel too much like work."

Kylie Minogue is set to release her new album 'Kiss Me Once' on 17th March.