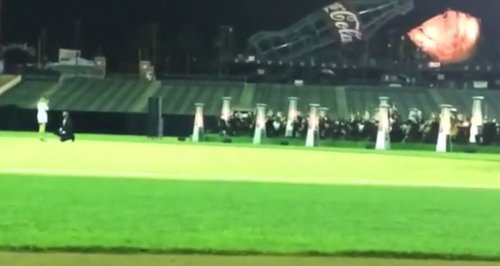 The rapper can be seen getting down on one knee to ask Kim Kardashian to marry him during the footage.

A video of Kanye West's proposal to Kim Kardashian has been posted online.

The footage was captured by YouTube co-founder Chad Hurley and sees the moment the 'Jesus Walks' man got down on one knee to ask the reality star to marry him.

Details of the couple's engagement have been emerging all week with Kim recently sharing a shot of her 15 carat diamond ring.

Kanye can be seen in the middle of the AT&T Park in San Francisco with the pair sharing an embrace after she accepts his proposal.

Watch the moment Kanye asked Kim Kardashian to be his wife below:

It has also recently been claimed the couple are planning on tying the knot during a ceremony in Las Vegas.

Kanye and Kim welcomed their first child together earlier this year and have been dating since the start of 2012.