Kanye West reportedly planned the banning of his latest album.

The artwork for Beautiful Dark Twisted Fantasy was believed to have been banned by U.S stores Wal-Mat after Kanye tweeted;

"Yoooo they banned my album cover!!!!! Banned in the USA!!! They don't want me chilling on the couch with my Phoenix!" Implying that Walmart had been offended by an oil-painted nipple, West cited the cover of Nirvana's Nevermind album, with its photograph of a naked baby. "So Nirvana can have a naked human being on their cover, but I can't have a PAINTING of a monster with no arms and a polka dot tail and wings,".

The chain of stores later denied the rejecting of the cover claiming they had never actually seen it.

The creator of the artwork itself has now revealed in an interview with the New Yorker that West was looking for "something that will be banned".

He continued by explaining "West chose [the one with] ... a naked black man on a bed, straddled by a naked white female creature with fearsome features, wings, no arms and a long, spotted tail".

Let us know your thoughts on the cover below… 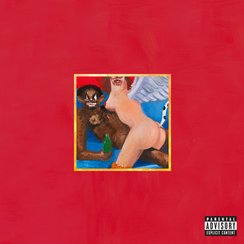