Is Cara Delevingne About To Launch A Music Career… With Kanye West?! 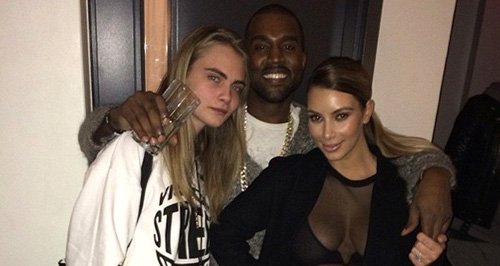 She’s already mates with his wife, Kim Kardashian, but is Cara Delevingne about to go into the studio with Kanye West?!

Rumours of model of the moment, Cara Delevingne, starting a pop career have been floating about for a while – but it looks like Kanye West is the latest person that wants to snap her up!

Cara and Kanye reportedly met up last week during Paris Fashion Week and Kanye attempted to persuade Cara to work with him instead of Simon Cowell who she had reportedly been in talks with.

An insider told the Daily Star, “Kanye would love to be Cara’s mentor. He thinks she has a great voice and presence, and could be the next Iggy Azalea or Rita Ora.”

And he doesn’t just want to be her mentor – Kanye has apparently also penned some tracks specially for Cara!

The source explained, “Kanye’s written some songs that would be perfect for Cara. He’s been talking to her about working on some music at his favourite recording studio in Paris.”

“Kanye wants to collaborate on a song with Cara to help launch her, and then let her go off and do her own thing.”

Model, actress AND singer? Cara could soon be a triple threat!