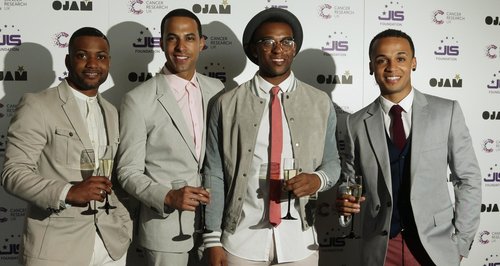 Marvin and JB from JLS stopped by Capital to tease what fans can expect from their upcoming new single.

JLS have promised new song 'Billion Lights' will allow the band to "go out on a high" and will match up to previous floor-fillers from the band like 'She Makes Me Wanna' and 'Beat Again'.

Band member JB Gill and Capital FM's Marvin Humes stopped by to talk about the newly confirmed single this week, which is set to receive its first play on Capital Breakfast this coming Monday (30th September).

"I think we wanted to go out on a high and I think 'Billion Lights' has just got massive energy to it," Marvin revealed during our exclusive chat. "I think we're probably most famous for our up-tempo tracks.

"You know ,'She Makes Me Wanna', 'Eyes Wide Shut', 'Beat Again', so for us we wanted to make sure that the last song we leave people with had that vibe to it ," he explained. "So that people can go crazy, dancing and going wild.

"'Billion Lights' was the one that when we heard it we were like, 'Yeah, it's wicked!'," Marvin added.

The 'Take A Chance On Me' four-piece are set to kick off their 'Goodbye' farewell tour this December alongside the release of a new greatest hits compilation.

Watch JLS chatting exclusively to Capital FM about their new single 'A Billion Lights' below: