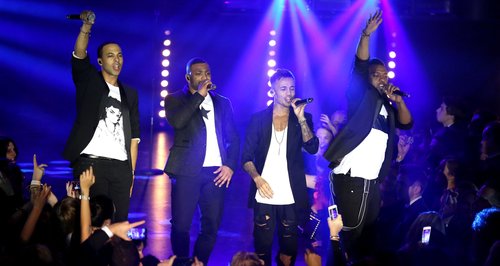 The 'She Makes Me Wanna' band played the first show on their final tour together this week.

JLS kicked off their 'Goodbye' farewell tour last night (1st December) and have revealed they were left "speechless" at the end of their first arena show.

The 'Billion Lights' four-piece are set to go their separate ways at the end of the year, and launched their final tour this week with a first show in Belfast.

"Last night's show was incredible," Capital FM presenter and JLS star Marvin Humes tweeted on Monday night (1st December). "I was speechless on that stage at times, it was overwhelming!

Check out a picture of JLS at Capital Rocks last week below (Credit: Getty):

The energetic showcase saw the band performing in matching monochrome suits for an energetic performance of their biggest hits from across their career.

JLS's 'Goodbye' tour continues with a show on Wednesday 4th December at the Capital FM Arena in Nottingham.