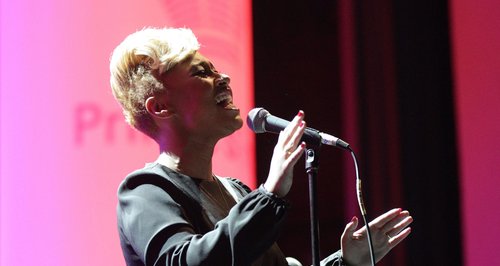 Could the 'Next To Me' singer's new album be well on the way?

Emeli Sande made a surprise appearance at the Lexington in London this week as she joined Chasing Grace on stage and performed two new tracks.

The never before heard tracks were called 'Peace' and 'Boats', according to the Mail Online.

The songs were written with the band's Phil Lee and she explained to the audience: "I'm just going to sing a few new songs, Phil came to my house one evening and we wrote these new songs, no one's ever heard them before, I've never sang them before, so I really hope you enjoy them."

Emeli is currently working on her new studio album and the follow up to the BRIT Award winning 'Our Version Of Events'.

Is this a sign that new music is on the way from Emeli?

Emeli told the crowd she was a big fan of Chasing Grace and is proud to see how far they've come.

"I met them three years ago and they were you know young kids and just seeing their progress and how much you guys have come on is amazing," she said. "I'm really proud of you and thank you for having me here tonight."

> What Is Emeli Sande's Real Name?