The 'Next To Me' singer was spotted on the London Underground before jetting to perform at Sir Elton John's party.

Emeli Sande was spotted filming her new music video on the tube this week.

The Scottish star was riding on the London Underground network following her triumph at the BRIT Awards 2013 and before she jetted to Los Angeles for the Oscars 2013.

The 'Clown' singer reportedly walked among regular passengers – who were unaware the singer was shooting a promo, according to The Sun.

The singer was the special musical guest of Sir Elton John at the 'Rocket Man' singer's annual get together and wowed on the red carpet in a black and white sophisticated number.

Check out a picture of Emeli on the tube shooting her new music video below: (Picture:Flynet) 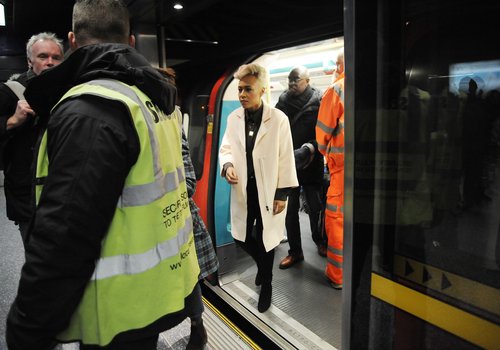 Speaking on her Twitter account about her recent BRITs 2013 triump, she admitted it's only just started to sink in.

"Thank you all for the congratulations!!! It's taken a couple of days to sink in," she wrote.

Meanwhile, the Oscars 2013 saw fellow British star Adele triumph as she performed her 'Skyfall' James Bond theme for the first time and picked up Best Original Song for the track.

Other winners on the night included the films Argo, Lincoln and Life of Pi.