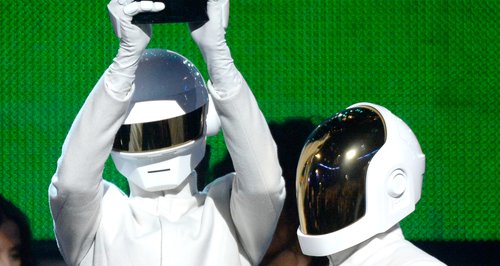 The dance duo picked up Album Of The Year for 'Random Access Memories'.

Daft Punk were the big winners of the 56th Grammy Awards last night (26th January) picking up the coveted Album Of The Year prize for 'Random Access Memories' as well as three other nods.

The duo beat the likes of Taylor Swift, Kendrick Lamar and Macklemore & Ryan Lewis to take the top crown – which was last year won by Brits Mumford & Sons.

Macklemore & Ryan Lewis were still celebrating throughout the night though, as they also scooped four prizes including Best New Artist.

It was also a night to remember for 17 year-old Kiwi Lorde who won two prizes for 'Royals'.

Other notable wins came for Pharrell Williams – picking up four, Adele winning her 10th Grammy of all time for 'Skyfall' and Jay-Z who joked to daughter Blue Ivy that he had a "gold sippy cup" for her.

Jay and wife Beyonce opened the entire show with a surprise and sexed up performance of 'Drunk In Love'.

Robin Thicke, Katy Perry, Pink and Daft Punk were also performing on the night, but it was the rendition of 'Same Love' by Macklemore & Ryan Lewis which had everyone talking.

Madonna and Queen Latifah joined the stars on stage with 33 couples in the crowd getting married in a mass ceremony.

It was a touching moment which had many stars in tears and also saw Katy Perry catch the bouquet!

You can check out all the Grammys 2014 action right here in our main Grammys hub.