Yorkshire braced itself for 80mph winds today and major flooding on the east coast.

Humberside police have issued an emergency warning at lunchtime, as water levels are expected to reach 30 year highs later today.

They've warned people in Grimsby and Cleethorpes, close to the River Humber are advised to consider evacuation of their properties before 5pm.

The East coast is expected to be badly hit, with Grimsby and Immingham worst affected.

People are being told to prepare and stay away from the coast.

Across the country the Amber warning remains in place with gusts reaching up to 80 mph in places.

There have been are a number of overturned vehicles in South and North Yorkshire. 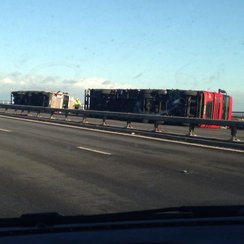 Across West Yorkshire Firefighters have been out to 16 calls where buildings have become dangerous because of the wind.

Many flights were delayed or cancelled at Leeds Bradford airport.