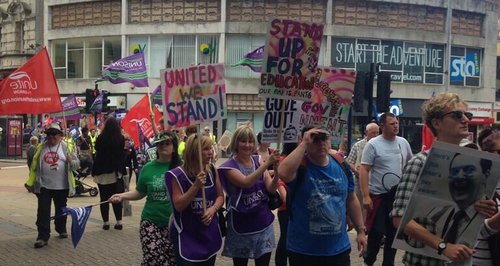 Teachers, firefighters, civil servants and council staff will walk out across the South Coast today as part of a massive nationwide strike.

They're taking part in a day of nationwide action which is also involving council staff, civil servants and firefighters - who'll walk out from 10am to 7pm.

Dozens of schools will be closed. Bin collections, libraries and street cleaning are among services that could be affected.

The strikes are over a range of issues, mainly pay and pensions.

Picket lines are set up outside council depots, town halls and civic offices across Hampshire.

Rallies and marches will be held in Portsmouth, Southampton, Winchester and on the Isle of Wight.

There will be picket lines, rallies and demonstrations in the following places across Hampshire, the Isle of Wight and West Sussex:

Isle Of Wight
11am: Rally with speakers. (location TBC)