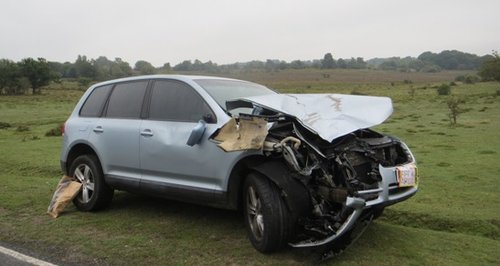 After an increase of animal accidents on roads in The New Forest, a map showing the locations could be drawn up and new signs put up in an effort to reduce the numbers.

It's after after an increase in animal accidents last year.

Ponies, cattle, sheep and pigs have roamed free in the New Forest for hundreds of years, shaping the unique and iconic landscape we know today.

Generally the number of accidents has dropped from the early 1990s when 40mph speed limits were introduced.

"A number of initiatives to combat animal accidents are in place including reflective pony collars, road signs, traffic calming measures and enforcement of the 40mph speed limit.

"We are disappointed that accident numbers have increased again, resulting in the deaths of 72 animals and injury to a further 32. Further strategies are in the pipeline which we hope will help to raise awareness amongst motorists who drive through the New Forest."

"None of the organisations working to reduce the frequency of accidents has a magic wand. We believe that in recent years, many different factors combined to bring accident rates down, including a great deal of awareness raising and education. We’re compiling a map of last year’s accidents and will be especially interested to see if they were concentrated on particular routes.

"Three out of four accidents are known to have involved motorists who live within a few miles of the Forest, including people who regularly drive along the Forest’s roads. Once a cattle grid has been crossed, drivers should expect animals to be on the road or to step out at the last moment, day and night – and therefore to proceed with care."

The New Forest National Park Authority has issued advice (below) and produced this video about driving safely:

Slow down, especially at night and when other cars are approaching with their headlights on

Take extra care when there are animals on the verges on both sides of the road – they may cross to join their friends.

Remember that deer easily jump the fences alongside roads like the A337, A31 and A35 and when there is one deer more will usually follow

The faster you are going, the greater the damage will be to the animal, your car and your passengers - start your journey early so you don’t have to hurry.

If you witness or are involved in an accident involving a pony, donkey, cow, pig or sheep, call the Police (999 for an emergency or 101 if it’s not an emergency). Animal emergency hotline cards also give you the numbers to call if you see sick, injured or distressed animals. Cards are available from garages and Local Information Points across the New Forest. To stock the cards contact the New Forest National Park Authority at enquiries@newforestnpa.gov.uk.