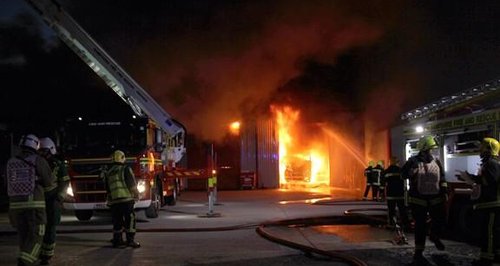 Five Hampshire firefighters have been hurt during a big fire in Marchwood near Southampton.

Six fire crews - about 30 firefighters - tackled the fire at Tip Trailer Services on an industrial estate in Cracknore Hard last night (31 August) at 19:26.

The fire caused loud bangs due to exploding cylinders in the building and a large plume of smoke which did not cause any risk to people living nearby. Crews worked to control the fire using jets and an aerial ladder platform.

There were no injuries to the public but unfortunately the building was extremely damaged by the fire.

“Five firefighters were assessed on the scene and one did attend hospital. All had minor injuries.”

There is an ongoing investigation into the cause of the fire.

WATCH: Billie Eilish Loved The BRITs As She Got To Spend More Time With Father

Billie Eilish's Hairdresser Reveals Her BRITs 2020 Look Secrets, Leading Up To Her 'No Time To Die' Performance