Theresa May says the Royal Navy's new aircraft carrier is a 'symbol of the United Kingdom as a great, global maritime nation' - as it arrived in Portsmouth for the first time.

Tens of thousands of people lined the harbour to welcome HMS Queen Elizabeth, which has berthed at its home port for the first time.

The Prime Minister hailed the ship as a clear signal the country will remain a fully engaged global power. Speaking on board, she said:

"Britain can be proud of this ship and what it represents.

"It sends a clear signal that as Britain forges a new, positive, confident role on the world stage in the years ahead we are determined to remain a fully engaged global power, working closely with our friends and allies around the world."

Mrs May said the "mighty ship" was a "stunning piece" of 21st century engineering that had involved more than 10,000 people in its construction.

Discussing Britain's carrier programme, she said: "As highly versatile and potent assets they will be able to meet the widest range of challenges around the world.

"Whether the task be high intensity war-fighting, targeted action to fight terrorism, or humanitarian relief to save lives overseas, these ships will transform the UK's ability to project power around the world.

"Alongside her supporting task group, including state of the art aircraft, helicopters and escorts, HMS Queen Elizabeth and HMS Prince of Wales will in time give the UK a truly world-class carrier strike capability for decades to come." 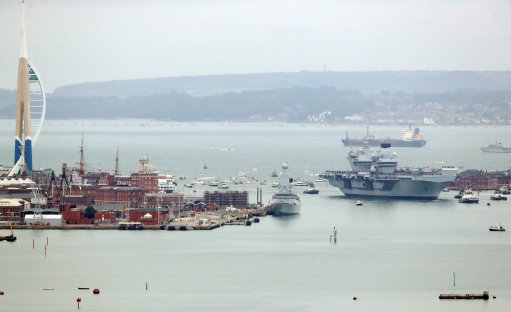 The 919ft (280m), 65-000 tonne vessel has been undergoing training and tests at sea after setting out from Scotland's Rosyth dockyard in June.

Those on board and watching from the shore were treated to two separate flypasts of Royal Navy helicopters, the first featuring a Sea King, two MK2 Merlins and two MK3 Merlins, which were then joined by two Hawk jets for the second.

A flotilla of craft followed the behemoth aircraft carrier as she sailed into the Solent before heading into Portsmouth, where, at its narrowest point, there was less than 66ft (20m) clearance on each side.

With boots polished and caps perfectly placed, all the ship's available company stood at the edge of the vessel as she arrived in the harbour and naval base.

As eager crowds waved and welcomed her in, Commander Darren Houston could be heard saying over the tannoy to those on the shore: "Good morning, Portsmouth."

Some of the keen well-wishers had camped out over on the Round Tower, the traditional spot in Old Portsmouth to view navy ships leaving and arriving at the base, in order to get a good view.

An 820ft (250m) exclusion zone, enforced by armed police in small boats, meant the port was effectively closed to the flotilla of boats which had turned out to greet the Queen Elizabeth.

A Champagne breakfast was held on board the Type 45 destroyer HMS Diamond for "VIPs and "VVIPs" from the Ministry of Defence.

Navy officers and family members also lined the jetty in the Navy base to welcome the ship, while the band of the Royal Marines played to entertain the crowds.