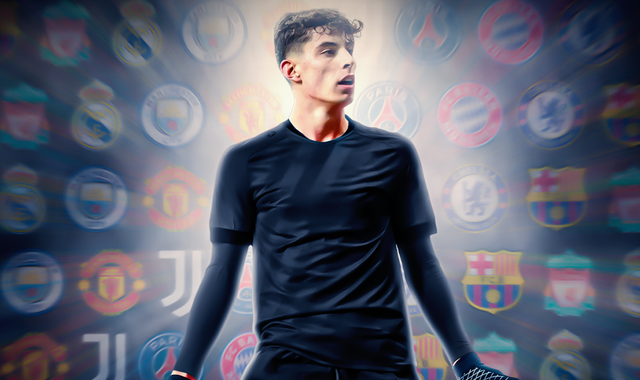 Chelsea target Kai Havertz has been tipped to become "an absolute superstar in the next few years" by German football expert Raphael Honigstein.

Bayer Leverkusen are holding out for £90m for the attacking midfielder, but Sky Sports understands a structured deal starting at £70m and rising to that higher figure with add-ons has been proposed.

Havertz is pushing his current club hard in order for a deal to be reached before Leverkusen face Rangers in the Europa League next week.

On Friday, Leverkusen sporting director Simon Rolfes said the club have not yet received an official bid from any club for the player, but Honigstein believes the player is well worth the money, should both parties reach a satisfactory conclusion.

He told the Transfer Talk podcast: "He has work to do and has things to prove because he's only just turned 21 but he's an outstanding talent, there's absolutely no doubt about that. He's in a position where he could dominate the German national team over the next decade, depending on his position.

"If you look at the unique combination he has of technical ability and eye for a pass, but also having the ability to score and create goals himself, and his runs to be good in the air, I think the best way to sum it up is that he's a cross between Mesut Ozil and Michael Ballack.

Chelsea will have an enviable plethora of attacking talent at their disposal regardless of whether Havertz joins, with Hakim Ziyech and Timo Werner snapped up earlier in the summer for a combined £83m.

Lampard's favoured formation is 4-3-3 but with games likely to be every three days next season, Honigstein does not believe the Chelsea boss will have any concerns rotating his squad to keep everyone happy.

He added: "Lampard will have his work cut out trying to solve how to combine all these players, but it's a wonderful problem to have as a manager. You almost want to have these problems and considering the fact he had talks with Werner and Havertz before these moves, he must have a clear idea of where they all fit in otherwise he wouldn't have gone for them in the first place.

"With the congested schedule for the 2020/21 season, there will be a game every three days until Christmas, so I think as much as we might worry about Tammy Abraham, Olivier Giroud and where they fit in, it's going to be absolutely vital to rotate and there will be injuries.

"I think every club would want to be in the position Chelsea look to be in, where they have real depth in key positions, especially up front. It still doesn't detract from my view that Chelsea have been opportunistic in the market, signing players who really deep down wanted to go somewhere else.

"Timo Werner wanted to go to Liverpool, while Havertz has become available only after some of the other clubs who might have shown an interest - especially the two main Spanish clubs Real Madrid and Barcelona - PSG, Man City, Bayern - haven't made a bid.

"If I was Chelsea, I'd have built from the back, but the market presented a real opportunity to pick up players that otherwise would've been beyond their reach this summer, and they've been really clever to get these guys now."

What next for Mesut Ozil?

Mesut Ozil is facing an uncertain future after being frozen out at Arsenal. Ozil is the highest earner at Arsenal on £350,000 a week and he has only one year left on his contract.

The midfielder did not play for Arsenal after the season restarted last month and he was missing again from Arsenal's squad for Sunday's 3-2 win against Watford.

Head coach Mikel Arteta has been reluctant to talk about Ozil in public. Arteta said Ozil missed the first game back against Manchester City for tactical reasons and he is said to have not featured in subsequent squads because of a back injury.

Honigstein believes it will be difficult for Ozil to resurrect his career at the Emirates Stadium, saying: "Arteta seems to have made up his mind that Ozil is not going to play a part going forward.

"He gave him the chance to come back and he did have some encouraging performances, but ultimately didn't do enough to hold down a place. Arteta is in a very strong position as a manager who can really force his views and choose his personnel in the squad.

"But the problem is that while Arsenal may want to take him off the wage bill, without his consent and without a club willing to pay the same wages - or at least a significant part of the wages - it's not going to happen.

"They could pay off part of the deal and release him but that would mean a huge financial hit with absolutely no benefit apart from saving a bit of money or they could keep him and hope things could change and he can come back. But there's a real reluctance of Ozil's part to leave just because the existing club don't feel he should be a regular at the moment.

"He's turned down an offer from Turkey in the past and I'm sure he could've gone to somewhere like Italy for part of the wages, but so far he's shown no inclination to do that. I feel he's within his rights to his wages and I don't see why things changing for Arsenal means Ozil needs to accommodate that. I don't see a good resolution. All I see is more inertia and the situation being dragged out for another season. As far as this summer is concerned, I don't see Ozil leaving."

'Poker and double-bluffing' in Sancho saga

Manchester United are growing increasingly confident a deal can be done with Borussia Dortmund for the transfer of Jadon Sancho after cooling interest in Jack Grealish.

Discussions for Sancho centre around the transfer fee and structure of payments. It is understood personal terms will not be an issue.

Dortmund aren't budging from their £110m valuation of the player, with £100m of that up front. Dortmund want his future decided by August 10, at which point they will head on a pre-season training camp. So would the arrival of Sancho at United further help close the gap to Liverpool and Manchester City?

Honigstein told Transfer Talk podcast: "There's absolutely no doubt he would be a huge improvement on what they have, especially if you think of the traditional importance of width in the United team. Wingers that would get the crowd excited and those who take on players, whip in crosses and score themselves - all these things Sancho will do.

"The stats for a 20-year-old are unbelievable in terms of the goals he's scored and assisted last season in a pretty talented Dortmund team. The flip-side to this conversation is that Dortmund want to make a very careful calculation which is similar to the one Leverkusen are making for Havertz.

"How much is the value of him staying with us? If we have to sell him for less next year, is that still a deal that is good for us because we have a better chance of winning the Bundesliga and going far in the Champions League next season with Sancho.

"That's why they've been so adamant for the £110m valuation being met and being met earlier because they don't want to get into a situation where they can't bring anyone in, and they don't want this to be a recurring theme until mid-October when the window could potentially still be open.

"Manchester United are still saying they are just in talks. It's a bit murky where both sides will try to get the best possible deal. There's a lot of poker and double-bluffing going on but it's now down to United to say 'here's the money'.

"The line is the sand that Dortmund have made both in terms of the valuation and the deadline means it will be hard for them to back down from this stance. United are going to have to go very far to meet those demands."

The summer transfer window will run for 10 weeks from July 27 and close at 11pm on October 5.

A domestic-only window for trades between the Premier League and EFL then runs from October 5 and closes on Friday October 16 at 5pm. Follow all the news and analysis on Sky Sports News and across Sky Sports' digital platforms, including with our dedicated Transfer Centre blog.