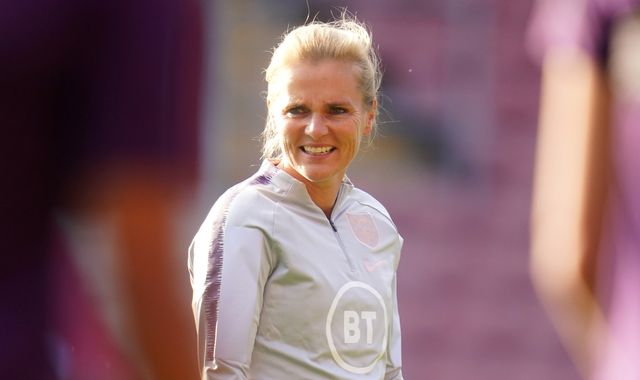 New England Women's boss Sarina Wiegman has been encouraged by the first look at her Lionesses squad – but is not setting any targets just yet.

Wiegman was appointed as Phil Neville's successor in August 2020, but started the role at the beginning of this month, after leading the Netherlands through their Olympic campaign this summer.

Her first game in charge is the World Cup qualifier against North Macedonia at Southampton's St Mary's Stadium on Friday, before the Lionesses travel away to face Luxembourg on Tuesday.

The 51-year-old has a proven track record of winning, leading her home country the Netherlands to Euro 2017 victory and finishing as runners-up at the 2019 World Cup in France.

And when assessing England's chances of repeating home-soil success at next summer's Euro 2022 tournament, Wiegman said: "What I know is we have a very good team, that the players are very willing to become better, to work together, very eager to learn.

"The ingredients are here to perform really well. The competition will be so strong, so I don't know where we will be next year.

"But I know now that the start is really good, I'm really enjoying it and these are the ingredients to continue and to become better."

Asked what she had seen from her new team so far in training, she said: "I've seen many things. First of all, an enormous, great work ethic.

"I'm very excited I can work with the team, but they work so hard, sometimes we have to ask just to slow down a little bit.

"There's very much quality. We had some principles we brought in, and they are just going for it and they really want to do very well. I [have] really enjoyed, and hopefully we can show that on the pitch."

England could be without Fran Kirby when they make their bow under Wiegman after the Chelsea forward did not train much in the week following a busy summer.