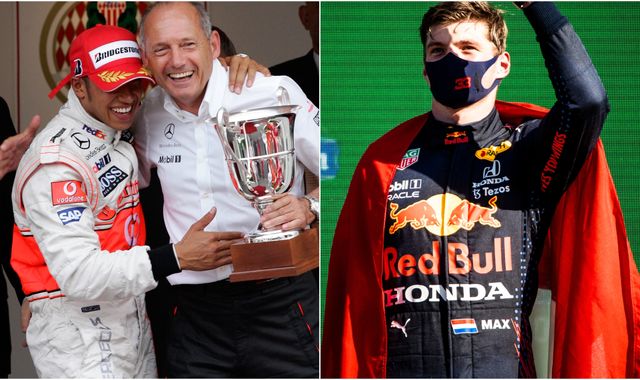 Verstappen holds a five-point lead over seven-time world champion Hamilton heading into round 15 of the season at the Russian GP this weekend.

Red Bull are producing their most sustained title push since their last world championship win in 2013, and Dennis believes only mistakes can deny 23-year-old Verstappen a maiden title triumph against Hamilton, the driver he famously brought into F1 at McLaren.

"I have a tremendous respect for the technologists at Red Bull and I think Honda have stabilised their engine performance very well," Dennis, who left McLaren in 2017 after a hugely influential 37 years with the team, told Sky Sports News.

"So I think it's going to be Verstappen. If it's not, it will be not because they lack performance but because they make mistakes.

"The question is, in what circumstances are these mistakes going to be made? It's going to be a very colourful end of season but I would probably back Verstappen."

Formula 1 had long been waiting for a genuine championship battle between its most successful driver and rising superstar.

This season has delivered aplenty with Hamilton and Verstappen locked in a close and increasingly intense duel.

Their coming together at the Italian GP was the second time in five races the pair had been involved in a race-ending collision, but there have been plenty of other flashpoints as the season has progressed.

Dennis says both Hamilton and Verstappen are unwilling to give the other a psychological edge by backing out of wheel-to-wheel battles.

"The rivalry is fantastic. The media hypes it up but they are constantly throwing water onto the fire. They're trying to calm things down, they're true professionals," said Dennis, who has launched Podium Analytics, a non-governmental organisation to help reduce sports injuries in young people.

"In many sports, there is a professional foul. In motor racing, the consequences of cars touching each other is hard to predict - you don't know if one car is going to ride over on the other, like in the Italian GP, or you don't know if you're going to spin off and hit a barrier.

"The reality is these two drivers are absolutely professional, they know what they're doing and they know getting into the lead early on during the race is critical. And so, that's when they really take risk and sometimes it comes off and sometimes it doesn't, and one thing that both of them doesn't want to show the other is that they are going to back off, that they are going to be intimidated. It's a couple of young stags rutting."

Dennis believes the reliability of Formula 1 cars now means the championship will be decided purely on driver skill.

"No one likes losing so (Lewis) won't be at all happy about being behind the game, but his motivation and any top driver's motivation is enhanced by having to fight.

"Fighting in a Grand Prix car is extremely knife-edge - if you are too aggressive with the car, you will destroy the tyres too quickly, you will determine the outcome of the race very, very early on because whilst it all looks very close, the reality is when a car is behind another he will have a much greater challenge at looking after his tyres.

"Engines and everything are so reliable now that it is between two gladiators and the outcome is one has to win and one has to lose."