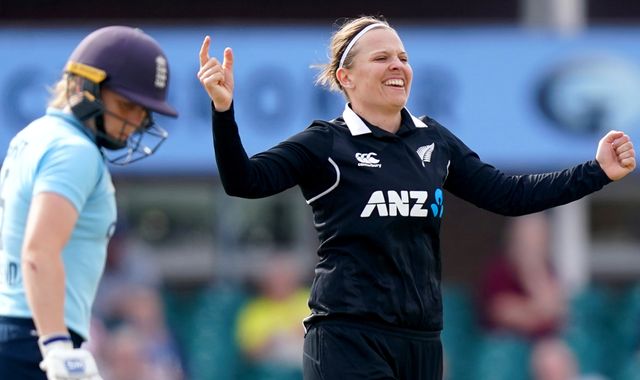 Lea Tahuhu and Maddy Green were the stars as New Zealand claimed a nervy three-wicket win over England in the third one-day international to keep the five-match series alive.

Tahuhu tore through England's top-order to take a career-best 5-37 before coming in late on and sealing the victory with a six after Green (70no) had led the chase of 179.

England had Katherine Brunt to thank for ensuring the game was as close as it was. The 36-year-old all-rounder hit an unbeaten 49 to help her side salvage something for their innings having been 78-7 before taking 4-22 with the ball.

However, that was not enough as Green held her nerve and had valuable support from Amy Satterthwaite (33) and Brooke Halliday (25) to clinch victory in the 46th over, ending their losing streak to claw it back to 2-1 in the series.

Having been asked to bat first for the third time in as many games, England quickly found themselves under pressure as Tahuhu wreaked havoc with the new ball.

The New Zealand seamer needed a review to get the lbw decision against Tammy Beaumont (1) but once that showed the ball struck pad before bat, the opener was gone.

Lauren Winfield-Hill (4) followed, another lbw, this time upheld on review with the ball shown to be just clipping leg stump and when Heather Knight (6) was caught behind fiddling at a ball outside off, England were in trouble.

It only got worse as Sophia Dunkley (6) was caught on the crease and bowled to leave the home side were 27-4, all four wickets falling to the seemingly unstoppable Tahuhu.

Amy Jones (21) and Danni Wyatt (10) managed to briefly halt the slide before each succumbing to debutante Molly Penfold (2-42), Wyatt falling to a stunning one-handed catch from Lauren Down at backward point.

Tahuhu returned to complete her five-for with the wicket of Charlie Dean, who dragged the ball onto her stumps as she played back and when off-spinner Leigh Kasperek (1-28) had Sophie Ecclestone lbw at the start of the 30th over, England were 101-8 and a long way short of a competitive total.

The ever-resilient Brunt remained though and found a willing ally in Kate Cross. For the next 12 overs, the pair managed to frustrate the White Ferns, who, with Tahuhu bowled out, were unable to maintain their early intensity.

It took some good fortune for New Zealand to eventually break the 53-run stand, Brunt driving the ball back at Kasperek and the bowler just got a fingertip on it, diverting it onto the stumps with Cross (29) unable to make her ground as she backed up.

Tash Farrant had played a valuable role with the bat in the second ODI and did so again here, making the most of being dropped twice in a Hayley Jensen over to add 24 useful runs for the last wicket with Brunt.

Jensen eventually had her wicket when she trapped Farrant (12) lbw in the 49th over to leave Brunt stranded one short of what would have been a well-deserved half-century and maintain England's unwanted record of having been bowled out in every ODI in which they have batted first this year.

Even with the England tail wagging, the game was New Zealand's for the taking with only 179 needed for victory.

However, having fallen short chasing in each of the first two matches of the series, the batting line-up was short of confidence and nerves would have been jangling again when Brunt dismissed openers Suzie Bates (5) and Lauren Down (7) inside the first seven overs.

Bates had already survived an lbw appeal on umpire's call for being too far down the pitch before she was castled and Down was caught at backward point the ball after another review, this time for caught behind.

Satterthwaite joined Green at 13-2 and, with such a modest total to chase, were able to take their time and gradually rebuild the innings.

Having seen off Brunt's opening spell, the runs started to come a little more freely and they soon found themselves in a very strong position with the run-rate little more than three an over and eight wickets still in hand.

Green offered a tough chance to Ecclestone as she tried to hit Dean (1-38) over the top, the fielder able to get a hand on the ball but not hold on as the ball bobbled away to the fence.

The same pair combined for the breakthrough wicket though, Satterthwaite advancing this time but getting beaten in the flight and lobbing a simple catch to Ecclestone at mid-off.

When Brunt was then brought back and dismissed Sophie Devine (3), the New Zealand skipper bowled as she played a horrible hack across the line, to ramp up the pressure again but Brooke Halliday helped Green get things back on track for the tourists.

The pair scored at a decent lick as they added 52 for the fifth wicket to take New Zealand to within sight of victory, Green reaching a well-constructed half-century in the process.

Nerves were set jangling again though when Halliday (25) was bowled by Farrant with Katey Martin castled by Ecclestone (1-41) in the next over and another 30 still required for victory.

New Zealand's luck seemed to be in though when Dean got the ball past Jensen's defences to flick off stump but not with enough force to dislodge the bails, only for the fortune to go England's way when Brunt's lbw appeal against Jensen was upheld with the third umpire unable to tell conclusively whether the ball struck bat or pad first.

That brought Tahuhu in with 21 still needed and after a couple of overs looking slightly uncomfortable trying to nudge singles, she went on the attack.

Twice she hit over the top for four and after taking New Zealand to within four of victory with another boundary through the covers, Tahuhu finished it in style by thumping a six back over Farrant's head.