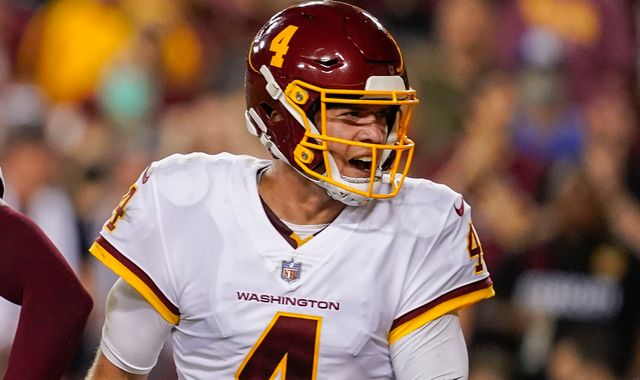 Washington Football Team won a wild one on Thursday night as a last-second field goal saw them edge past the New York Giants and clinch a 30-29 win over their NFC East division rivals.

Story of the Game

Washington kicker Dustin Hopkins was actually afforded two tries at the game winner. Though he initially missed with his first effort, because Giants defender Dexter Lawrence jumped offside Hopkins got another go at it from five yards closer and this time fired his 43-yarder through the sticks.

This was a game the Giants really should have won, with Lawrence's late penalty one of a number of errors that cost them the contest - the offense, in particular, guilty of leaving plenty of points out on the field.

There was firstly the first-quarter sack of Daniel Jones that took them out of field goal position, the Giants quarterback then had a 56-yard touchdown run chalked off in the second due to a holding call on C.J. Board, but most crucial of all was a wide open Darius Slayton's drop in the endzone from a 47-yard pass from Jones that would have put New York up by 10 with six minutes left.

Graham Gano, who enjoyed a fine night, instead fired through a fourth of five field goals for the evening, but two plays later Washington suddenly had the lead as Taylor Heinicke first hit J.D. McKissic for a 56-yard chunk play and then picked out Ricky Seals-Jones in the back of the endzone for an 11-yard go-ahead score.

Heinicke would be picked off on Washington's next series to open the door for the Giants, and though they reclaimed the lead courtesy again of Gano's right boot, they left two minutes on the clock for the home team to drive down the field and set up Hopkins' game-winning kick.

The two quarterbacks were terrific in this game. The much-maligned Jones was sacked four times, but that only served to make his performance against a fearsome Washington defensive front the more impressive. Jones had 249 yards and a TD through the air, and a further 95 and a score on the ground - and he could (and perhaps should) have had even more than that.

Meanwhile, it was a night to remember for Heinicke, with the six-year journeyman quarterback tasting his first victory as a starter in the NFL. It was only Heinicke's second start for Washington, and third ever, as he took over from Ryan Fitzpatrick who was injured in their season-opening defeat to the Los Angeles Chargers, and he was superb.

Heinicke completed 34 of his 46 pass attempts for 336 yards, with two touchdowns. And although he threw an interception late in the fourth quarter, he quickly recovered to drive his team down the field to set up the game-winning field goal on his next series.

Washington are back on the road in Week Three, facing a tricky trip to Buffalo to take on the Bills, who made it all the way to the AFC Championship game last season.

As for the Giants, still looking for their first win, they host the Atlanta Falcons in New York.

Sky Sports NFL is your dedicated channel for NFL coverage through the season - featuring a host of NFL Network programming. Don't forget to follow us on skysports.com/nfl, our Twitter account @SkySportsNFL & Sky Sports - on the go!