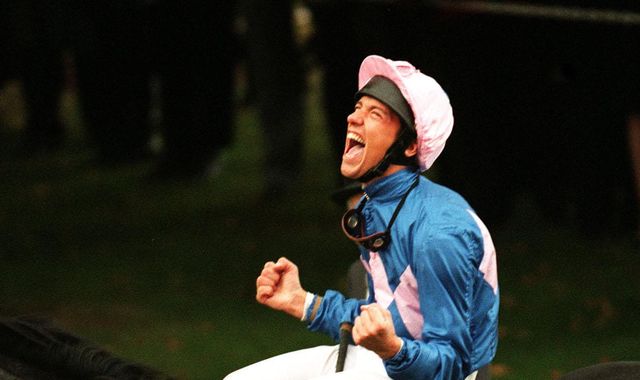 Frankie Dettori has enjoyed all manner of success on the track, winning almost every major prize and riding some of world's most celebrated horses, but there is one single day which stands head and shoulders above the rest. The day his life - and horse racing - changed forever.

September 28, 1996, started like any other big Saturday for the Italian: A massage at home, a last-minute read through of the racecards in the newspaper and a routine journey down to the track.

Fittingly, it was to be Ascot - one of sport's most historic venues - which would play host to a feat which had never before been, and may never again be, repeated as Dettori celebrated victory in all seven races.

Speaking exclusively to Sky Sports' David Craig, Dettori relives every moment of that most famous of days...

"I love going to Ascot, it's my church," Dettori explains. "It's where I've had my best successes and my first Group One, so I always feel great and something extra when I go there.

"In the old grandstand you walked down steps and it was a bit of a dungeon really because we had no windows. You can smell the tradition, the old pegs, the wooden walls and the old toilets.

"Like any normal day, I went to my peg. I spent most of my life sitting next to Pat Eddery, he was one of my heroes. I was pumped up to say the least. I'm loud now but imagine multiplying that by 100 and that's how obnoxious I was, screaming all the time, a nuisance for everyone.

"Then the day starts, like any normal day. You put your colours on and off we go."

The action began with a 2-1 favourite and a confident Dettori led from the front on his "banker of the day", the aptly-named Wall Street in the Cumberland Lodge Stakes.

"This horse was working well, was a front-runner and it was a small field so I thought that If I can get my fractions right, I'll be very hard to catch," Dettori recalls.

"That started the day well and it takes the pressure off. Check my weight and it's onto race two."

After Wall Street's straightforward success, 12-1 shot Diffident promised to be an altogether trickier affair, having finished well down the field in his previous two efforts for trainer Saeed bin Suroor.

"I worked for Godolphin so I had to ride Diffident but I thought this one can't win," Dettori explains.

"I found myself in a good slot but I got a bit stuck. I was trying to go left and right and poor Diffident was confused.

"Walter [Swinburn, on Lucayan Prince] got out from the fence and jumped me at the end but I was so lucky to hold on. Even I was shocked I won but you need a bit of luck. I'm sure if I rode the race again I'd finish third."

With two winners in the bag, attention turned to the feature race of the day, the one Dettori wanted more than any other - the Queen Elizabeth II (QEII) Stakes. Another link-up with Bin Suroor saw Dettori aboard 100/30 chance Mark Of Esteem.

"You could tell everybody was tense, we really wanted this one to win," Dettori says.

"Again, I got stuck for room a bit but luck was on my side that day and I got the split at the right time and he took off. When I asked him to go, he was like a cheetah.

"I was flying and didn't care about the rest. Everybody then wants a piece of you and then I'm flat out because I'm in the next race."

Another well-named partner, Decorated Hero was the class horse in the race - the Tote Festival Handicap - but, on paper, a tough draw from stall five made Dettori's task almost impossible.

"It was a good horse but when I looked at it in the morning I thought that where I'm drawn, it's almost impossible to win," Dettori says. "At the old Ascot it favoured to be on the stand's side.

"Luckily for me, they all went way too fast. I was thinking that if I just sit quietly, I might pick up a place. They put it on a silver plate for me.

"I was still buzzing from race three and you can't get any higher but it carried on. It's true that the momentum builds up and the adrenaline keeps going. Horses feel it and I could feel that the crowd were getting behind me."

The Rosemary Stakes was next and after a clear victory on Decorated Hero in the previous contest, this would prove a much closer affair. Not that Dettori has any memory of the event.

"It's been 25 years and this is the only race I don't remember. The only thing I remember is beating my good old friend Ray Cochrane.

"I don't even remember crossing the line. Then I've gone back in, been interviewed but I'm still in shock.

"I came to my senses and saw the colours of Jeff Smith [owner of Lochangel] and then had a bit of a panic. Only Sir Gordon Richards, Willie Carson and Alec Russell had won six in a row. I had a cold sweat thinking: 'I'm so close.'"

By now Dettori's weighing room neighbour - and his idol as a young jockey - Pat Eddery had seen enough of the Italian's backside for one day, but had the chance for some revenge in the Blue Seal Stakes.

"On paper it looked a race between me and Pat [on Corsini]," Dettori says. "I gave my saddle to Ian Balding [trainer] and he said: 'Whatever you do, don't lead'. I was in front and thinking I'm going to get a serious telling-off by Ian when I go back in.

"It turned into a sprint and I thought: 'Please keep going'. I could hear Pat and he was getting pretty cheesed off because he kept finishing second to me.

"The feeling I got was tremendous. I punched the air and was absolutely loving it. It was the Dettori show and I was milking it, waving at everyone and kissing everything in sight."

With Dettori on the verge of history, the BBC interrupted its traditional Grandstand coverage to switch live to Ascot and the final mount, Fujiyama Crest, was slashed from 12/1 to 2/1 favourite for the Gordon Carter Handicap, despite having not won for over a year.

"I walked into the paddock and they had the betting board," Dettori recalls. "I glanced up and saw Fujiyama Crest was 2/1 favourite. I had a chuckle to myself: 'People must be stupid, it was 12/1 five minutes ago. This horse can't win'.

"I managed to get him to the front and decided to kick early and get them all stretched out. They were all queuing up to get to me and I thought someone would come out of the pack and beat me.

Already a big name in racing circles, Dettori was now a household favourite. Book deals, panel show appearances and even a cameo hosting the BBC's Top Of The Pops followed.

"I signed thousands of racecards, I was there for hours. I don't think I left the track until 8pm and the last race was at 5.

"The next morning I couldn't wait to get the papers. I used to get them delivered on a Sunday, so I opened the door in my t-shirt and underpants and it was like a scene from Notting Hill, all the paparazzi taking pictures and TV cameras. I realised then the impact this had had on the world.

"Myself and Peter Burrel my manager, we took advantage of it the opportunity to promote myself and racing. I did everything.

(c) Sky Sports 2021: Frankie Dettori relives his greatest day in the saddle 25 years on from riding all seven winners at Ascot