Graeme and Lisa Wharton, from Sunderland, have been named Slimming World's Couple of the Year after losing more than 10 stone between them.

They are now both the lightest they have been in their adult lives after trading a diet of white bread rolls, crisps, chocolate and frozen ready meals with chips for healthier alternatives including eggs, fruit and plenty of vegetables.

41 year old Lisa, said the couple struggled with their weight since they were teenagers.

She said:
"My family always described me as 'from good stock' or 'big-boned' and Graeme was just told he had 'puppy fat' so neither of us worried too much about our size.

Then I suppose when we got together we were happy and content and, like a lot of couples, that saw us gain more weight.''

Pictured below: Graeme and Lisa's before and after pictures 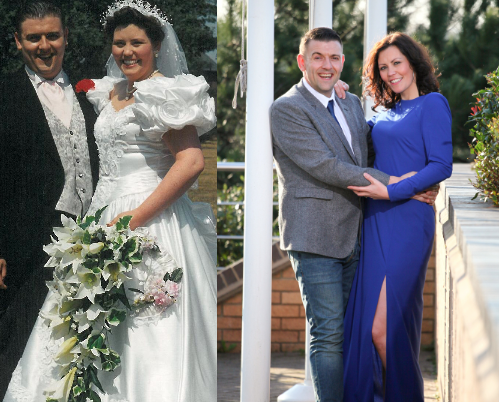 Mrs Wharton said:
"I wore a size 18 dress on our wedding day and Graeme's suit had a 48 inch waist.

I always say we were blissfully ignorant because we were just young and content, we didn't realise how big we were or the health implications of our weight. We didn't think about what we were eating and just concentrated on enjoying our children.''

Mrs Wharton joined Slimming World in 2006 and lost 4st 7lbs but stopped attending the weekly group because of new work commitments. She rejoined in January last year and her husband decided to accompany her.

42 year old Graeme, who works as a taxi driver, said:
"The turning point for me came on Christmas Day 2012. We got dressed up for dinner, put our gladrags on as you do, but I felt so uncomfortable in my smart trousers and shirt because they were tight and I felt like I was spilling out over my trousers.

I ended up going home to put my joggers on and that's when I knew I needed to do something.

I think people expect it to be really nerve-wracking for a man to join a group like Slimming World but I honestly didn't worry because I had Lisa with me and there were lots of other couples there so I wasn't the only man. We always have a laugh.''

The couple also took up walking, which progressed to running, and Mrs Wharton also joined a local bootcamp class.

They have both signed up for the Great North Run in September, with Mr Wharton fundraising for Meningitis Now and Mrs Wharton running for Sunderland AFC's The Foundation of Light.