The North East's set to benefit from a £15 billion programme of improvements to roads across England.

Yorkshire and the North East together will benefit from 18 new schemes worth around £2.3 billion, creating an estimated 1,500 construction jobs.

Transport Secretary Patrick McLoughlin said:
"Today I am setting out the biggest, boldest and most far-reaching roads programme for decades. It will dramatically improve the network and unlock Britain's economic potential.

Roads are key to our nation's prosperity. For too long they have suffered from under-investment.

This government has a long term plan to secure the country's future and this £15 billion roads programme is demonstration of that. It will directly benefit hardworking families across Yorkshire and the North East."

It represents the biggest investment in roads in a generation and will transform the major corridors of the M1, M62 and A1. The new funding builds on the improvements that began in 2010, including:

* A second Tyne Tunnel opened in 2011, widening the A19 under the river to two lanes in each direction.

Spending during the next parliament on the local and national roads network across Yorkshire and the North East will be boosted further by maintenance funding worth £1.6bn.

Chair of the Cabinet Infrastructure Committee and Chief Secretary to the Treasury, Danny Alexander, said:
"World class infrastructure is vital if we are to build a stronger economy, but it matters in other ways too. It invigorates communities and gives people more opportunities to get on in life.

This is why I have ensured that this government has prioritised funding roads, and railways, at a high level for future generations.

For decades our roads have suffered from under investment, so I'm particularly delighted to be able to announce this expansive range of new road schemes today.

Investment on this scale is only possible because we have taken the difficult decisions needed to control our public finances and stuck to our recovery plan which is now delivering strong growth and record numbers of jobs. "

Highlights of today's announcement are:

* In addition to the Â£300m widening scheme between Coal House and Metro Centre (announced in 2013 and currently being delivered), work will begin to widen the  adjacent section to the south between Coal House and the junction with the A194 (M), as well as provision of additional lanes to the north from Scotswood to North Brunton. This will reduce congestion and enable development around Newcastle and Gateshead

* Investing £290m to upgrade the A1 from Morpeth to Ellingham to create a new expressway-standard road to Ellingham and add further improvements between Ellingham and the Scottish border. This will create 34 miles of continuous "expressway" dual carriage north of Newcastle, better connecting Northumberland into the rest of the country;

*Planning will begin to upgrade the last non-motorway section of the A1 in Yorkshire, between Redhouse and Darrington. Once completed, it will reduce congestion and improve safety along this route, as well as creating a new corridor to the North East, reducing congestion on the M1 around Sheffield and Leeds 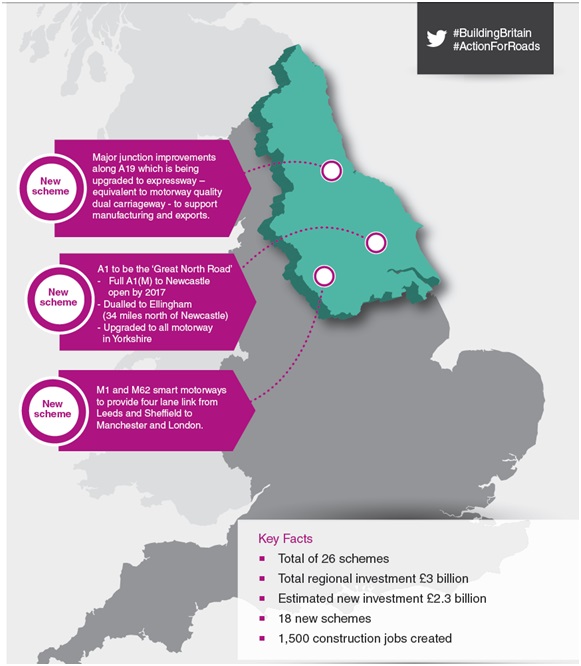